Back to Ohio to Erie Trail Tour: Day 2 – Waynesville to Lockbourne

After a home-cooked breakfast courtesy of my relatives in Lockbourne, I got back in the saddle once again on schedule right around 9:00am. My custom route off of the main Ohio to Erie Trail route once again took me onto State Route 665, a.k.a. London-Groveport Road. Thankfully, it was dry today, and this time of day also much more free from traffic. State Rotue 665 quickly becomes State Route 317, and from there I jumped onto a couple of more minor back roads to make my way over to Three Creeks Metro Park, to jump on the Alum Creek Trail. 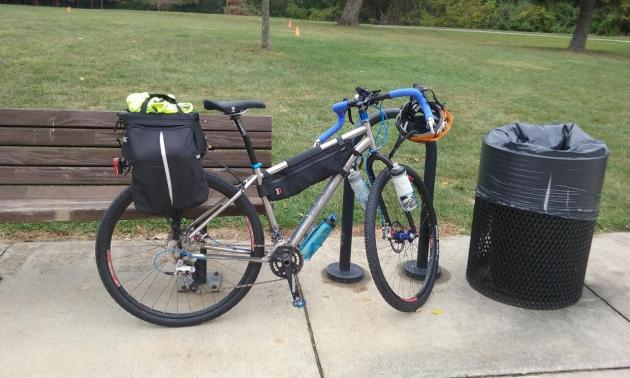 An access point to the Alum Creek Trail in the Three Creeks Metro Park near Groveport, Ohio

Stopping here to get my bearings, my pre-printed directions said I should have had about 10-1/2 miles by now, but my computer only registered a little over 6. My suspicions from yesterday were correct; the rain had gotten into my bike computer and partially worn the battery down. Luckily, at the last minute before leaving a few days ago, I grabbed an extra 2032 battery and stashed it in my repair kit. I swapped out the battery in my wireless Cat Eye Strada computer sensor. My chain seemed a bit squeaky after all the rain, so I dripped some Tri-Flow on it. After a bathroom break, I headed north on the trail.

The Alum Creek Trail easily took me straight up through the east side of Columbus. It passes through a mixture of urban and wooded settings, with a couple of brief on-street detours around areas under construction. At one point, I reached a dead-end, but there appeared to be a new section of trail that continued, but it was blocked off with big “ROAD CLOSED” signs. It looked passable, but since you never know what you might come across later (an un-marked bridge out?), I took to the street, with a detour on Airport Road, then Sunbury Road through Ohio Dominican University, and then re-joined the trail a short bit later, where I saw the opposite end of the newly-constructed section with the same “ROAD CLOSED” signs. (I would later learn that this section of the trail was, indeed, complete–the grand opening ceremony was held the VERY NEXT DAY, and for all practical purposes, I could have ridden it.)

I went through a couple more park-like sections, including one with a long wooden boardwalk. I rode a short stretch of the boardwalk, even though it looked like it still might be a bit slippery from yesterday’s rain. When I stopped in the middle to take this photo, I ended up slipping on the soles of my shoes, so I oped to walk the bike the rest of the way. 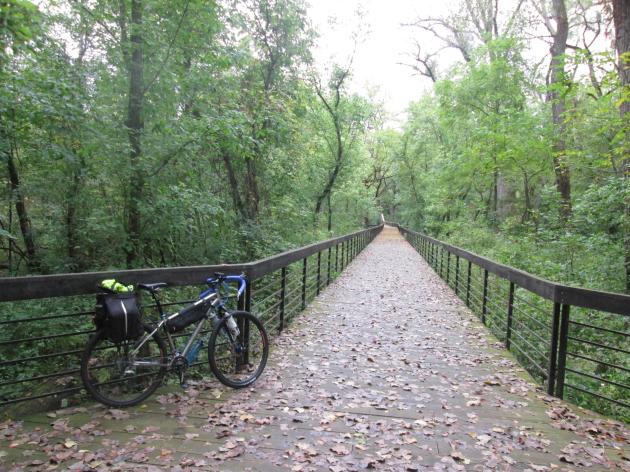 A boardwalk on the Alum Creek Trail northeast of Columbus, Ohio

Continuing north, I got to Schrock Road, where my route re-joined the actual Ohio to Erie Trail. Here, you have a choice of routes, either continue north on the Alum Creek Trail, or cut east on Schrock Road. I opted to head east on Schrock Road, following the sidewalk for the short stretch to the next intersection, where you cross Schrock Road to get on the Maxtown-Schrock Trail, a.k.a. the Westerville Bikeway.

At the corner of State Street and Cherrington Road, there’s a commemorative plaque for the Ohio to Erie Trail: 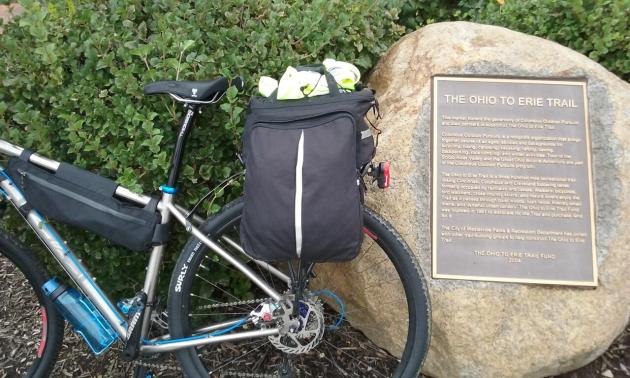 Commemorative plaque for the Ohio to Erie Trail on the Maxtown-Schrock Trail in Westerville, Ohio

A bit after that, there is a bike station with restrooms, water fountains, and a do-it-yourself repair stand, with an air compressor pump (schrader valve compatible only).

When you finally reach this trail’s namesake Maxtown Road (a.k.a. Polaris Parkway), there’s a spur that goes behind the Home Depot shopping plaza and becomes the Genoa Trail. Just off the trail in the same shopping plaza is the Trek Bicycle Store of Columbus, where you can find free air (compressor pump with schrader valve head and presta adapter). 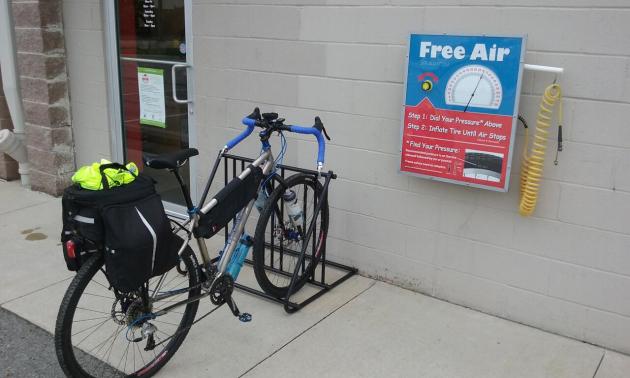 Back door of the Trek Bicycle Store of Columbus – Westerville

Around this time is when I should have looked for a place to get some lunch, but I just felt like I wanted to keep moving and make good time instead. One of the downsides of nice urban trails like the Alum Creek Trail and the Westerville Bikeway is that with all of the intersections and stop signs, it’s hard to keep up a good steady pace. I found myself now having been on the road for over four hours and having barely covered over 30 miles. I would learn later, though, that I should have stopped to get lunch here, because the options for food are limited on the next major portion of the route.

The Genoa Trail continues north, with another do-it-yourself bike repair station at the Genoa Township Fire Department near the intersection of Big Walnut Road. 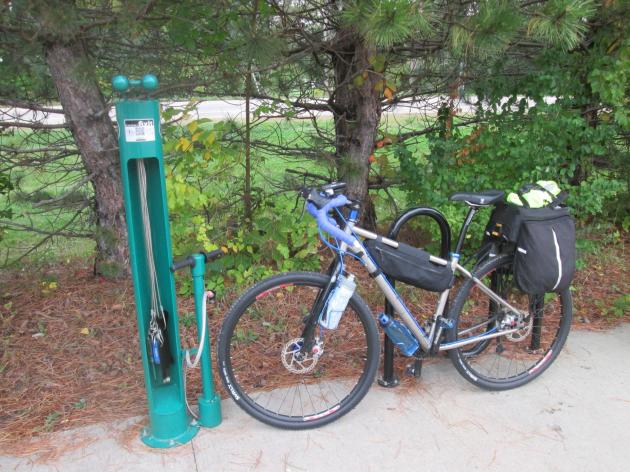 The Genoa Trail ends just short of the village of Galena. In Galena is a local restaurant called Mudflats Bar & Grill that looks like it would be a nice place to stop if you had time to relax for a while. I continued on, following the good signage for the Ohio to Erie Trail on the local roads. I had hoped to find good eats in Sunbury, but didn’t see anything on the main streets through town (later, I noticed that had I ventured a block off the route, Joe’s Firehouse Tavern would have made an excellent choice).

I continued on out of town where the route goes on Hartford Road to the tiny village of Hartford. This road is long, straight, and mostly flat, and some pretty serious headwinds were starting to kick up. In Hartford, there are really no food options available, and by this time I was beginning to realize how REALLY hungry I was, so I pulled off to the side of the road to eat a Clif bar.

Battling the headwinds on the rolling farm roads to Centerburg, I jumped at the first opportunity for food that I saw in town, the Subway. I enjoyed my tuna sandwich and chocolate chip cookies at a picnic table outside, next to a small local park with a water fountain.

Just a couple of short blocks from downtown Centerburg is the beginning of the Heart of Ohio Trail. I made my way over and stopped to call my hosts for the evening to let them know I was on my way.

The start of the Heart of Ohio Trail in Centerburg, Ohio

I had originally planned to spend this evening in Mount Vernon. I logged into Warm Showers a couple of weeks ago and found a local man named Randy who was willing to be a host, but because of issues going on with his house, he only had space for me to camp in the yard. Since I was packing light without a tent, I looked for another option, and Randy told me about a couple that he knows in Howard that have built a biker cabin near the Kokosing Gap Trail there. They are not on Warm Showers, but he gave me their email address, so I got in touch with them, and they agreed to let me use the cabin.

The Heart of Ohio Trail follows a fairly typical path through secluded woodlands until it reaches its end in Mount Vernon. Just before reaching Mount Vernon, I passed by this tall tower that looked like an old smoke stack, but now was surrounded by a spiral staircase. I thought it looked like a can’t-miss attraction, so I wheeled over, locked my bike to the gate, and began to climb the stairs.

The tower is called Rastin Observation Tower, and is part of Ariel Foundation Park. It’s a former industrial site, and the tower was just opened to the public on July 4, 2015. I seem to get more afraid of heights as I get older, but I figured self-supported bike touring is all about overcoming your fears, so I should also take advantage of this opportunity to overcome more fear.

Looking down through the open-grate platforms on Rastin Observation Tower in Mount Vernon, Ohio

A view from the Rastin Obervation Tower in Mount Vernon, Ohio 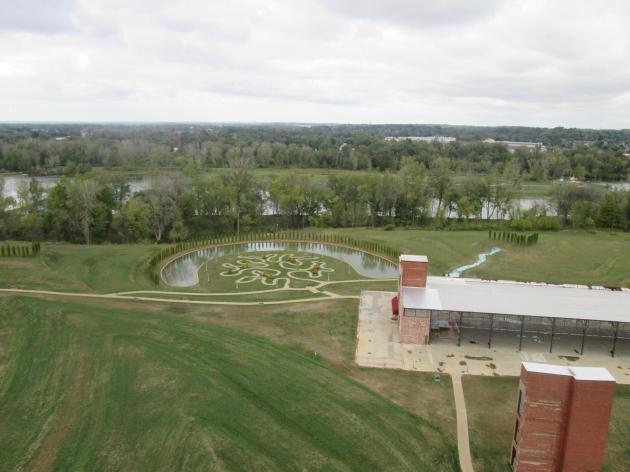 Another view from the Rastin Obervation Tower in Mount Vernon, Ohio

The Heart of Ohio Trail ends just short of downtown Mount Vernon, The on-street route through town is clearly marked with Ohio to Erie Trail signage, leading to the start of the Kokosing Gap Trail. 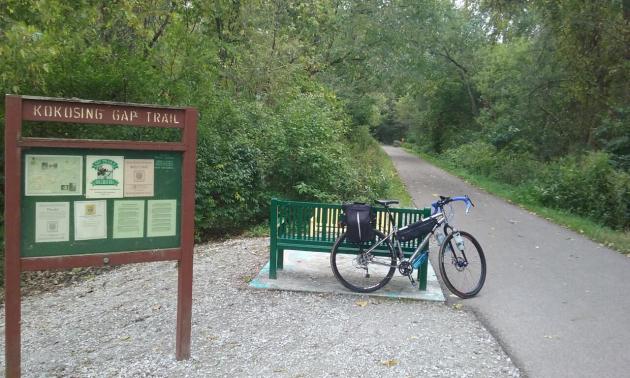 Trailhead of the Kokosing Gap Trail in Mount Vernon, Ohio

The scenery of the Kokosing Gap Trail is very similar to that of the Heart of Ohio Trail. Passing through Gambier, you can see a historic steam locomotive, coal car, and caboose: 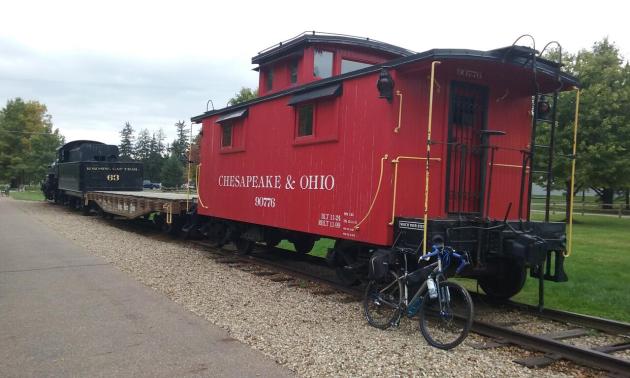 A few more miles further, and I reached the trailhead at the village of Howard.

Trailhead of the Kokosing Gap Trail in the village of Howard, Ohio

Mileage for the day was about 76-1/2 according to my computer: 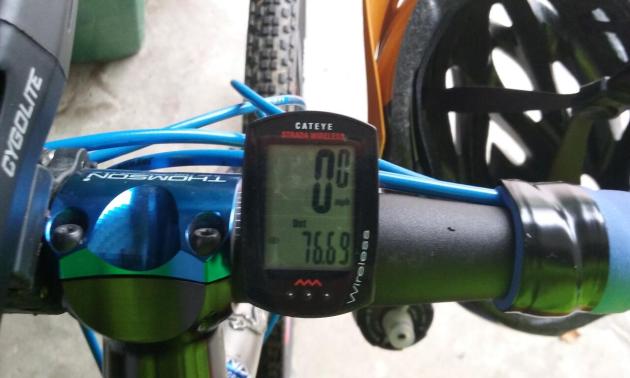 But being shorted before I replaced my sensor battery this morning, the online route shows a more accurate 82-1/2 miles.

I called my hosts to let them know I’d arrived. Dick showed up in his pickup truck just a minute later; we put my bike in the back, and he drove me back up the road (probably less than a mile) to he and his wife Pat’s house. I took a shower right away, and they invited me to join them for dinner. We were joined by their friend Randy from Mount Vernon.

As it turns out, Dick, Pat, Randy, and a couple other friends were the ones who originally conceived of the Kokosing Gap Trail over 25 years ago. They recognized the potential of the former railroad right-of-way, formed the non-profit group to support the construction of the trail, and continue to help with the trail’s on-going maintenance. To this day, the Kokosing Gap Trail remains the largest, paved rail-to-trail park in the United States maintained solely by donations and volunteers. This is hard and often thankless work, so if you’re reading this and you’re a fan of bike trails (even if you’re not in this area), I encourage you to support their efforts with a donation. Go to www.kokosinggaptrail.com for details.

The biker cabin is located on Dick and Pat’s property, but is easily accessed from the trail. It was completed earlier this year. Dick and Pat hired Amish builders to construct it; the day they arrived, they had it done in three hours. It’s a rustic cabin with no electricity or plumbing; there is a port-o-potty outside. There are two lofts with foam mattresses, and a folding cot on the main level. The floor has space for more guests if they have their own sleeping pads. 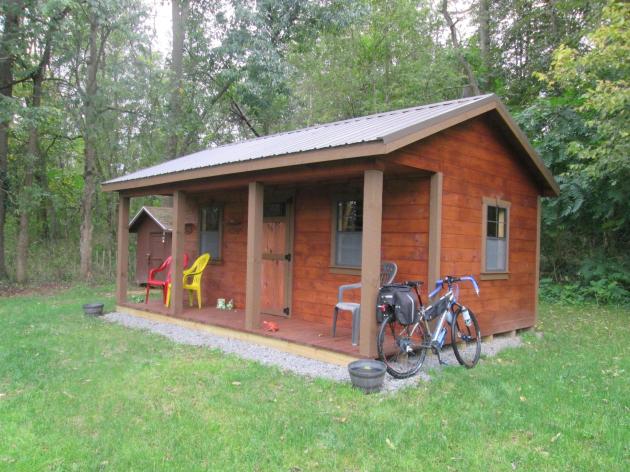 The biker cabin adjacent to the Kokosing Gap Trail in Howard, Ohio

The view from one of the loft beds of the biker cabin on the Kokosing Gap Trail in Howard, Ohio 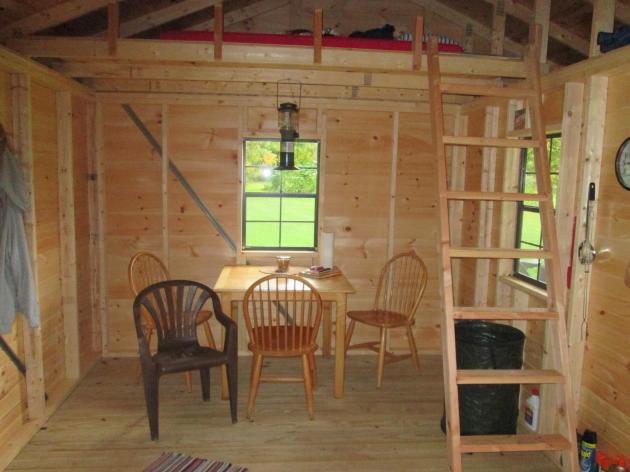 Main level view of the biker cabin on the Kokosing Gap Trail in Howard, Ohio

To inquire about the availability of the biker cabin on the Kokosing Gap Trail in Howard, Ohio, send email to: