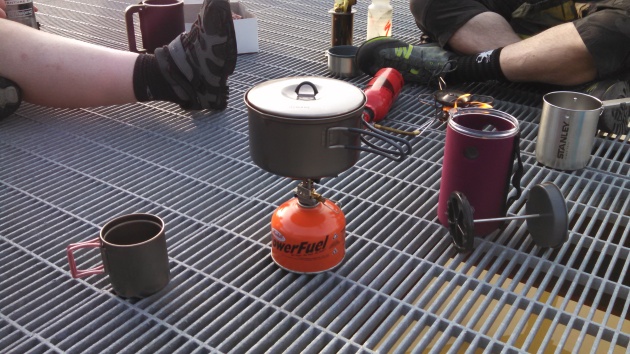 Inspired by #LARiverCampCoffee (http://bit.ly/1NUfQlY), the movement for mini-adventures in Cleveland for when we don’t have time for real adventures continues!

#CLECampCoffee is a casual gathering for lovers of bicycles, camping, and coffee.

Arrive by bike, and use your camp-cooking gear to make coffee for yourself and to share, and enjoy conversation with your fellow campers.

The rules aren’t strictly enforced, so you can come by foot or car if you like, and you can stop for coffee at a (preferably local) shop on the way. Tea drinkers are welcome, too!

When: Wednesday, May 13, 2015, 8:00am
Where: The Towpath Trail boardwalk along the Beaver Marsh in Cuyahoga Valley National Park

Meet around 7:30am at Century Cycles in Peninsula if you want to join a short ride down. A couple of us may continue south on the Towpath Trail for a longer day ride.

Check for updates on the Event page on Facebook.

Other than a little miscommunication about out group’s start time to ride into town, the first Cleveland Camp Coffee was a success, with three participants. If anyone showed up at 7:00am, we’re sorry we missed you; we got there a little after 8:00am. Stay tuned for details about the next gathering!

Inspired by #LARiverCampCoffee (http://bit.ly/1NUfQlY), let’s start a movement for mini-adventures in Cleveland for when we don’t have time for real adventures!

#CLECampCoffee is a casual gathering for lovers of bicycles, camping, and coffee.

Arrive by bike, and use your camp-cooking gear to make coffee for yourself and to share, and enjoy conversation with your fellow campers.

The rules aren’t strictly enforced, so you can come by foot or car if you like, and you can stop for coffee at a (preferably local) shop on the way. Tea drinkers are welcome, too!

The Scranton Spoon is the nickname given to the observation deck/dock that extends over the Cuyahoga River from the new section of the Towpath Trail in the Scranton Flats. If you’re coming from the south, follow the Towpath through Steelyard Commons, then go up W. 14th Street almost to the end, turn left onto Fairfield Avenue, then turn right onto Scranton.

Check for updates on the Event page on Facebook.

The first annual Road Apple Roubaix bike ride was intended to be a gravel bike ride through rural Amish Country in Geauga County. With all of the recent snow, including a few more inches that fell overnight (and during) the ride, it turned into a perfect day to ride my fat bike. The temperatures were mild (mid- to upper-20s) compared to the previous couple of days, so it was a comfortable ride.

Conditions were perfect today for riding a fat bike on the Ohio & Erie Canal Towpath Trail in the Cuyahoga Valley National Park. Mild temperatures in the 30s and 40s made for crunchy, grippy snow, and foot traffic made most sections packed and fast.

I ride the Twinsburg City Park Loop when I want to squeeze in a quick ride close to home. It’s good on just about any kind of bike–cyclocross, hybrid, mountain, or in this case, my Salsa Mukluk snow bike.

I started at the corner of Glenwood and Gary drives. The snow in the wooded sections of the Old Hickory Trail was perfect; deep enough to get good traction, but light and fluffy enough to keep a brisk pace, with some previous hiking tracks providing somewhat of a packed base. The paved trail along the Officer Joshua T. Miktarian Memorial Parkway was completely un-plowed and un-tracked, which made it virtually impassable, so I had to jump on the road for that part. The Center Valley Park Trail was plowed, which made the going there quick and easy.

I only saw one other person during the ride, a guy on showshoes, who you’ll see briefly in the video.

A few of us in the Peninsula store like to take short one-night bike tours, or Sub 24-Hour Overnights, throughout the year. With snow bike season in full swing, we figured why not take a snow bike tour?

Chris got the bright idea to drive out to Oil Creek State Park, near Oil City, Pennsylvania. The park has a bike path that runs along the creek, which we could ride on fat bikes until we got to a hiking trail that leads to the top of the ridge overlooking the creek. Up the ridge is a set of lean-to shelters for overnight camping. Then, we’d ride back to the car the next morning.

So what does one pack for a bike-camping trip in the winter time? It’s pretty much the same as bike-camping any other time, except you take some warmer clothes. We could save a little packing space by not taking tents, since we’d be sleeping in a shelter.

A 5-second time-lapse video of riding my Salsa Mukluk 2 fat bike in the snow at the Bedford Singletrack in the Cleveland Metroparks Bedford Reservation. Only about 3 miles of riding, on the Parallel Universe 1 Trail, last section of the Friendship Trail, Moore Trail, and Volunteer Spirit Trail.

A 5-second time-lapse video of riding fat bikes in the snow on the Ohio & Erie Canal Towpath Trail in the Cuyahoga Valley National Park.

It’s been a lower-than average mileage year for me; by mid-August of 2013 I had three century rides under my belt for the year, but I had not done one at all this year until today. A day off with fine fall weather (summer sun with mild early fall temperatures) beckoning took me to the Ohio & Erie Canal Towpath Trail with my Salsa Fargo.

Other than a short ride to work one day, this was the first test of some new upgrades on the Fargo. I had purchased a pair of Velocity Blunt rims that I found a good deal on a couple of years ago. They are 36-hole rims, so I figured they’d make a good pair of heavy-duty touring wheels someday, and was I saving them until I settled on what hubs to use. A couple of friends of mine started using generator front hubs, so I jumped on the bandwagon to try out being self-sufficient with power while on the road. I went with the Cadillac model of hub, the Schmidt SON28, and likewise for a dynamo-powered headlight, the Busch & Mueller Luxos U. For the rear hub, I went with a Shimano Deore XT.

The Luxos U headlight has a handlebar-mounted switch with a built-in USB port. During the daytime (when you’re not using the headlight), you can plug in your smartphone or any USB-powered device to keep it running and charged. With my phone in my top tube bag and the USB cable running between the phone and the light switch, I was good to go.

Occasionally taking the phone out to snap some pictures of the scenery along the way didn’t post any additional challenges. 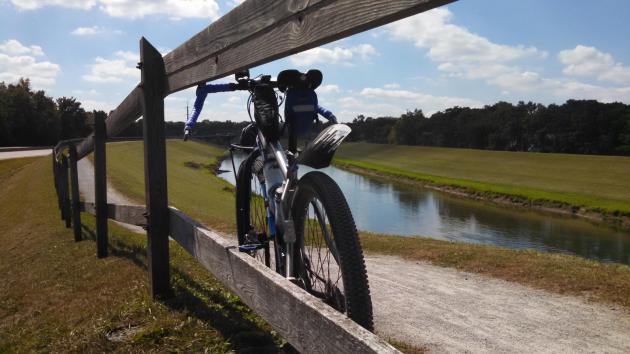 I noticed there were a few more sections of pavement on the Towpath compared to the last time I had ridden down this far south. One part included a section just south of the Summit/Stark county line. I suspect this may have been done after the repair of some flood damage from storms that we received in Northeast Ohio in the spring of this year.

Downtown Massillon is currently the only unfinished section of the Towpath Trail in Stark County. The trail ends when you reach the Lincoln Way bridge. I usually just detour through downtown–it’s quicker and less complicated–to make my way over to the Walnut Road bridge, where the trail continues south. Instead, today I decided to follow the posted detour just out of curiosity. It takes you over the river on the Lincoln Way bridge, then along a convoluted series of back streets, glass-strewn alleys, and paved local park paths until you reach Walnut Road. However, I noticed this not-yet-open extension of the Towpath Trail extending under the Lincoln Way bridge: 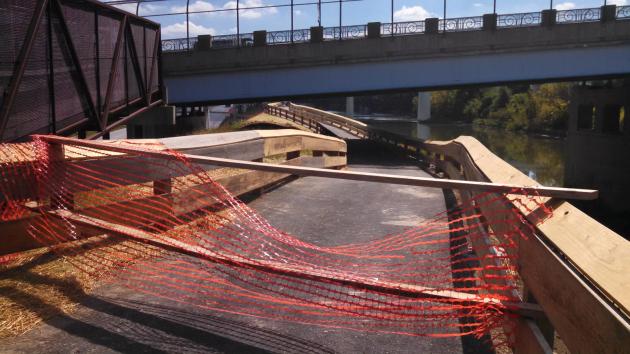 When I got to Walnut Road, looking north, I could not see where this new stretch connected to continue south. So, I’m not sure when this new trail will open, and if and when it will complete the continuous trail through Massillon.

UPDATE Nov. 30, 2014 – Apparently, there was a dedication and ribbon-cutting ceremony for this new section of trail on November 12.

Since my goal was to do 100 miles today, I continued south of Massillon until my cyclocomputer hit the 50-mile mark, which happened to be this spot about a quarter-mile south of Wooster Street in Navarre, on another stretch of new pavement:

I had a Clif Bar snack before turning around and heading back north. I stopped at the Cherry Street Creamery in Canal Fulton for some lunch (chili cheese dog and a soft pretzel).

Usually, when you do an out-and-back ride to reach a specific distance, the margin of error makes you end up a little over or a little under your target mileage. Surprisingly, in this case, the moment I arrived right at my car back at my starting point in Peninsula, my cyclocomputer turned over just 1/100th of a mile over 100 miles. 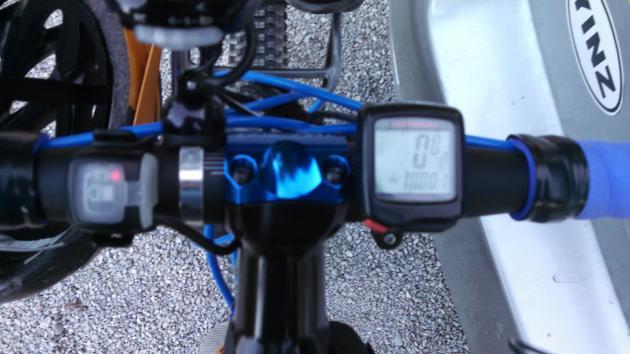 The generator hub coupled with the USB port on the headlight worked perfectly. After running the Endomondo app on my phone during the entire 8-hour ride, I ended up with a fully-charged phone.