Legends of the Beer Ride

Whether you’re in an urban, suburban, or rural area, every group of cyclists has their own set of traditions for the “Beer Ride.” But for the uninitiated, I provide for you here a step-by-step guide to planning your own Beer Ride.

Step 1. Select a date. Under ideal circumstances, the Beer Ride is spontaneous, i.e. “Hey, let’s do a Beer Ride tomorrow night.” But, this is the real world, and folks need time to get permission from their significant others and/or employers, so a week or two advance notice works best.The beer ride is often a recurring event on or near a national holiday, as in the case of my group’s original Beer Ride, as well as this latest one, Cinco de Mayo.

Step 2. Publicize your Beer Ride on Facebook or some other accessible place on the Interwebz. “But,” you’re asking, “Won’t that mean there will be a bunch of whackos showing up for my ride?” Well, yes, but that’s the whole idea–making new friends and having a good time. Worst-case scenario, you’ll have a good idea of who to leave off the guest list for the next Beer Ride. Plus, when some wet blanket hassles you afterwards about not getting an invitation, you can tell them, “It was a public event. You didn’t need an invitation.”

You’ll have a core group of “founders” who started your Beer Ride tradition, and a handful of others who rotate in and out on an ongoing basis. For each ride, one of the founders will have a lame excuse for backing out at the last minute.

Step 3. Choose your bike. Any bike will do, although if you’re the type of person whose bike collection is up in the double digits, you’ll have a bike dedicated just for Beer Rides. A Surly makes a nice choice, as it did for over half the people on this ride.

Step 4. Choose a starting location for pre-ride beers. A local bar, your local beer-friendly bike shop, or someone’s house makes a good choice. In our case, it was the house of the guy who backed out of this ride. If there’s anything better than raiding somebody else’s beer fridge, it’s raiding somebody else’s beer fridge when they’re not home. The pre-ride beers might get so out of hand as to force everyone to forego the actual ride.

Step 5. Take photos to share the debauchery during the ride. The photos will get progressively more blurry as the night goes on, either because of the pre-ride beers, or the increasingly dark conditions in which cell-phone cameras don’t work so hot.

Step 6. Choose a destination. You can vote as a group, either ahead of time or the night-of, or as a founder, exercise your authority to choose when you organize the event. A place with food and a good selection of beer is a good choice, such as Mr. Zub’s Deli in the Highland Square neighborhood in Akron.

An off-road route, like the Ohio & Erie Canal Towpath Trail, is nice, but not necessary. A few on-road connections are unavoidable, including a hill or two like Merriman Road or Portage Path to separate the women from the girls.

Lock your bikes up, especially if you’re riding to a place like Akron. Not everyone will remember a lock, but as long as you have about one lock for every three bikes, you should be in good shape. Sitting by the front windows where you have a good view of the bikes helps as well.

Step 7. Enjoy your meal, mid-ride beers, and the ride back. You may want to add more bars to the route–this is where group cohesion usually breaks down, as ride fatigue and beer fatigue catches up with some riders and not others.

Fellow bar-hoppers will notice your group on bikes and make some comment like, “Hey great idea; don’t have to worry about getting a DUI.” While technically, you CAN get a DUI while riding a bicycle, in our experience, The Law will leave you alone as long as you’re not acting like a jerk.

Inevitably, one rider will somehow get lost on the way back and end up at the corner of Steels Corners and Hudson Roads, nowhere near the actual return route.

I raced in the Sport class of The Big Valley Race (mountain bike race) held on the property of Camp Manatoc in Peninsula, Ohio. Thanks to my friend Amanda for the photos. 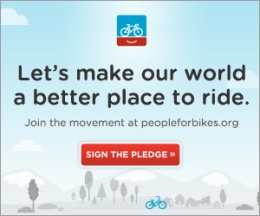